The group’s avian research is focussed on the spatial ecology and behaviour of several wild bird species, particularly procellariform seabirds (shearwaters and petrels).

In particular we are developing the use of data logging technology and novel computational methods to measure behavioural patterns while at the colony, and spatial behaviour while foraging at sea and during migration.

We are currently working on projects involving a range of species from colonies across the globe.

We are interested in how individuals schedule visits to their nests throughout the different stages of the breeding season, and how individual patterns of activity vary with respect to the chick, their partner, neighbours, the wider colony, and environmental conditions. In collaboration with Microsoft Research and the Freie Universität Berlin we are developing a network of nest-based sensors and data loggers capable of recording activity at the colony (individual identity on entry and exit of the burrow, with corresponding individual weights - see Autonomous Monitoring of Vulnerable Habitats).

We are also interested in the spatial behaviour of shearwaters during their foraging trips at sea and how this relates to patterns of colony activity. By deploying an array of bird-borne data loggers (GPS, Depth, and Seawater immersion) we can record detailed behavioural information on the movements and behaviour of shearwaters while they are away from the colony during foraging trips. 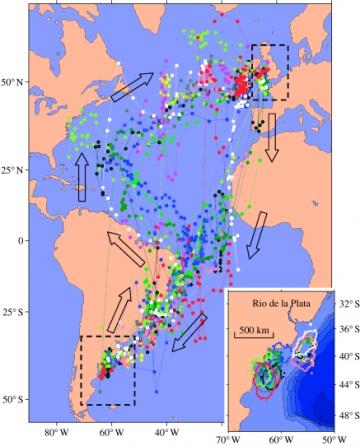 The Manx shearwater makes a long transatlantic, transequatorial migration to South America during the non-breeding season. We are interested in the timing and movements involved in this behaviour and the types of activity that occur en route and have deployed geolocation loggers that record the movements and behaviour of shearwaters during their migration. This work has already led to the discovery of migration stopover behaviour in areas of the North Atlantic during the return leg of the migration:

We also collect similar information on the foraging and migration behaviour of Manx shearwaters from other colonies around the Irish Sea. We are deploying data loggers on birds from colonies on Ramsey Island (Pembrokeshire, Wales), Lundy Island (Devon, England), and Copeland Island (Northern Ireland). We hope this information will reveal interesting inter-colony differences (or similarities) in behaviour.

Our Puffin Project started on Skomer Island in 2007, when we deployed light-loggers combined with a seawater immersion switch on breeding adult puffins Fratercula arctica for the first time. The data collected since then from these devices showed an unexpected migratory behaviour which challenges the conventional views of navigational control of avian migration, i.e. genetic or cultural inheritance. Indeed, the puffins seem to have a very dispersive migration, with individuals overwintering in completely different areas of the North Atlantic, some puffins spending the winter near the British coasts, other going near Greenland and others to the Mediterranean Sea, as showed in a recent paper:

We are currently interested in the mechanisms underlying these strikingly different migratory strategies, and in investigating the route fidelity of individuals, as well as their timing of migration and possible stop-over areas. We are also keen to address questions regarding the nature of the juveniles’ overwintering behaviour and its importance in the determination of adult migration, and the incubation strategy and life-history of breeding individuals. Furthermore, as for the Manx shearwater, we are also interested in the patterns of activity at the nest throughout the breeding season.

The Balearic shearwater Puffinus mauretanicus is listed as Critically Endangered in the 2009 IUCN Red List. It has a tiny breeding range (the Balearic Islands; Mallorca, Cabrera, Menorca, Ibiza, and Formentera) and a small breeding population (est. 2,000-2,400 pairs) which is undergoing a rapid population decline due to interactions with introduced mammals and commercial fisheries.

Numbers recorded in the traditional post-breeding areas of the Balearic Sea and off north-east Spain have declined since the mid-1990s, with a corresponding increase in numbers recorded off the coasts of northern France and south-west U.K.

In order to better understand these changes we are begining to use bird-borne geolocation loggers to collect information on the migration movements of this endangered species.